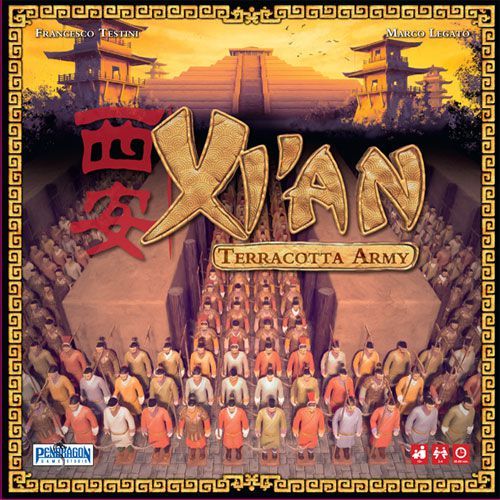 246 BCE: The future first emperor of China, Ying Zheng, orders the construction of the Terracotta Army. It will be part of the "Great Mausoleum", a monument built to celebrate the Qin dynasty's endless glory and also to protect him in the afterlife. As a delegate of the Emperor, you will be asked to fulfill his wish by leading a team of workers and helpers to obtain resources, craft and decorate the warrior statues, and supply them with fine wood and bronze weapons. Xi'an is played over six turns, with two rounds in each turn. This means that each player will play exactly twelve times during the game. During each turn, players draw the first four cards from their personal workers deck, then play two rounds in the turn. First, each player choses two cards and sets aside the remaining two cards face down. The second round will use the remaining two cards. After six turns, the player who has gained the most prestige points wins. —description from the publisher