The Undercity: An Iron Kingdoms Adventure Board Game 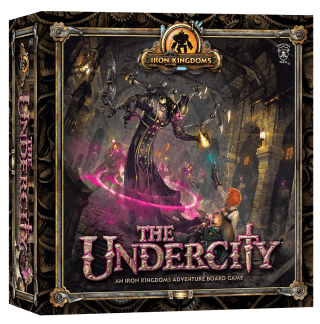 The Undercity puts a spin on the classic dungeon crawl adventure, setting it within the vast underground labyrinth of one of the Iron Kingdoms’ most famous cities. This board game for two to four players and comes with a seven-adventure campaign. The players play one to four characters from the Iron Kingdoms universe as they try to weed out a nefarious evil that has been lurking in the Undercity of Corvis. All players will be playing on the same team and the game requires no game master. The players work together defeating enemies, achieving objectives, and gaining experience that can be used to give new skills to their characters that can be used in subsequent adventures in the campaign. The game will come with almost 40 different miniatures with 16 different sculpts. The four heroes are Milo Boggs (the alchemist), Canice Gormleigh (the gun mage), Gardek Stonebrow (a trollkin warrior), and Pog (a gobber mechanic) that controls a light warjack named Doorstop. Each character has a starting stat sheet, but players can purchase character ability cards with XP gained from the adventure to enhance and customize their characters. Combat is based on rolling dice against opposing attributes. Players will be able to use feats and abilities to give boosts to these dice rolls, similar in many ways to other games based in the Iron Kingdoms.