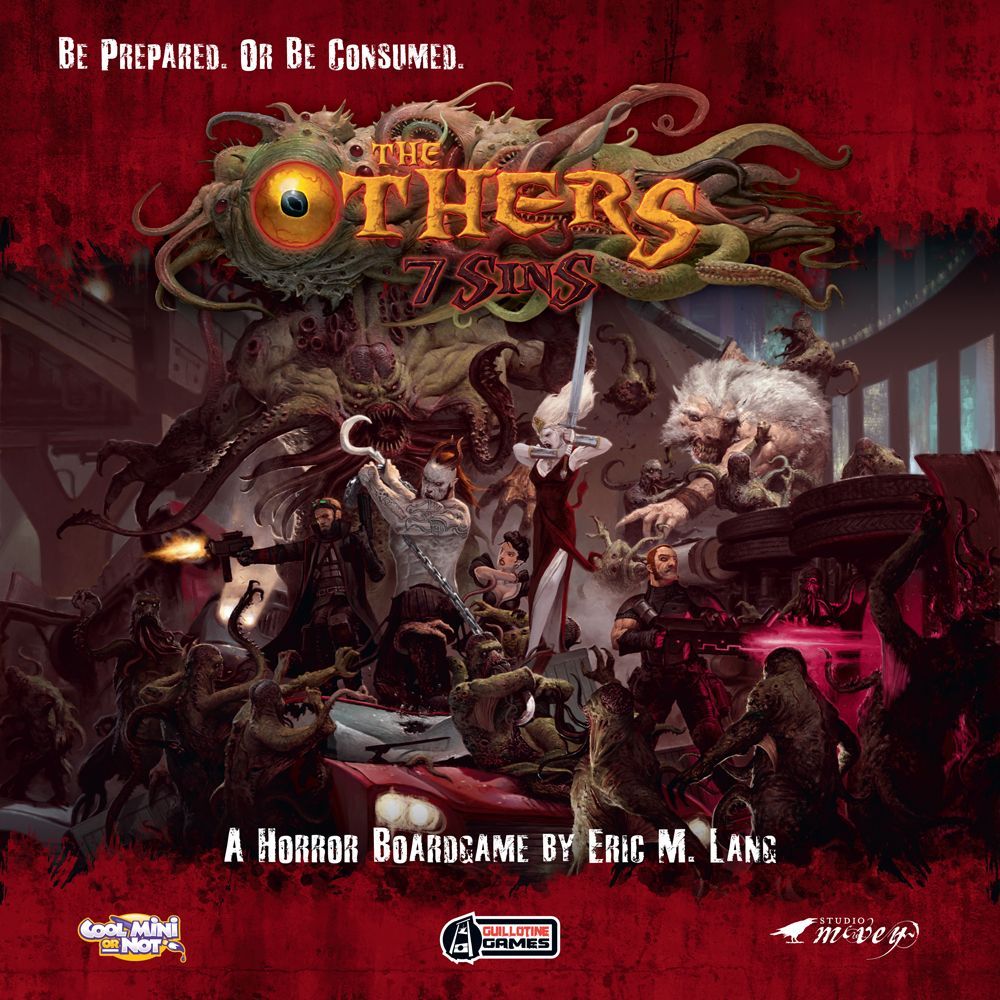 Description from the publisher: In The Others, the world stands on the brink of apocalypse, as the fanatics of the Hell Club have summoned the 7 Deadly Sins to lay waste to our reality. Slowly the Others have creeped into our lives, corrupting society from within. The city of Haven is the key to their invasion, but it will not go down without a fight, thanks to the actions of the paranormal organization known as F.A.I.T.H. (Federal Authority for the Interdiction of Transdimensional Horrors). Each session of The Others is played with one player controlling the forces of a single Sin, against the other players who control a team of 7 FAITH heroes. The heroes cooperate to survive the Sin's attacks and accomplish the missions set before them, while the Sin attempts to thwart the heroes in all ways (preferably by destroying them). The heroes are divided into different classes, each specialized in a different aspect of the game. Leaders are good at helping the other members of the team. Bruisers are excellent melee fighters. Snipers are experts at using guns to put down monsters from a distance. And Fixers have the resourcefulness and knowledge of the occult necessary to resolve supernatural crises that spread through the city. Each hero also has their own stats and unique abilities that set them apart from all others. Knowing when to bring in the right reinforcement can be key to FAITH’s victory. Corruption is one of the main mechanics of the game. It is both a way for the Sin to consume heroes, and a way for heroes to accomplish amazing feats they wouldn’t be capable of normally. Taking corruption grants heroes powerful bonuses (as long as they keep taking corruption), but when they become fully corrupted, their darkest secrets may come back to haunt them and tear the team from within, or their flesh might simply succumb to the sinful influences. The Sins player, on the other hand, has access to the different monsters of each Sin, including Abominations, a Controller, and the terrifying Avatar of Sin! These monsters can attempt to destroy the heroes, or simply hinder their progress on their missions. Each Sin provides the Sins Player with a different deck of Sins cards that can be played at different times to surprise players with different effects, often tied to the strategy of each Sin. Yes, because each Sin taints the game with an overarching mechanic that is always in effect. For example, Pride punishes prideful heroes that venture into the streets on their own, while Sloth punishes heroes who try to move quickly across the board. Heroes will need to learn to deal with the different influence of each Sin, which will always stand between them and their mission. The Sins are also aided by Acolytes, with each session using a different type. These lowly corrupted servants of darkness can fight and stand in the way of heroes, but they also have a once per round special ability that reflects their previous lives. For example, corrupted hobos take equipment from heroes, corrupted nuns corrupt the city districts, and corrupted doctors keep heroes from healing. There are 7 different stories that players can embark on for each session of The Others. Each of them brings different special rules, different dynamics, and a unique system of branching missions the heroes need to accomplish in order to be victorious. There are Terror stories, which are more straightforward, focusing on action and combat; Corruption stories revolve around the Corruption spreading through the city and the heroes themselves; and Redemption stories rely on saving the city and the few innocents that remain. Each story can be played on a different map setup, which further makes the dynamic of each session unique. The board used in The Others is made up of several tiles, each depicting a different city district and different configurations of streets. As the city of Haven still belongs to humanity, and it’s the Sins that are attempting to take it over, the heroes can use it to get different benefits each district offers them. For example, they can go to the hospital to heal wounds, to the museum to get rid of corruption, to the RavenCorp tower to get new equipment, or to the police station to call in an orbital strike. What districts are available on each map, and their location, can greatly change the dynamic of the game. As the game progresses, and depending on how badly the heroes fare against storyline plot twists and developments, the Apocalypse Track will advance, making the Sins gradually stronger and more terrifying. Apocalypse cards, tied to the type of story being played (Terror, Corruption, or Redemption) introduce new twists and challenges to the game, even bringing in the members of the Hell Club themselves! Heroes will die. Either in noble sacrifice, torn apart by claws and tentacles, or consumed by the corruption welling up in their souls. The question is whether the FAITH team will manage to fulfill their final mission in time, or whether the Sins will reign supreme over humanity.