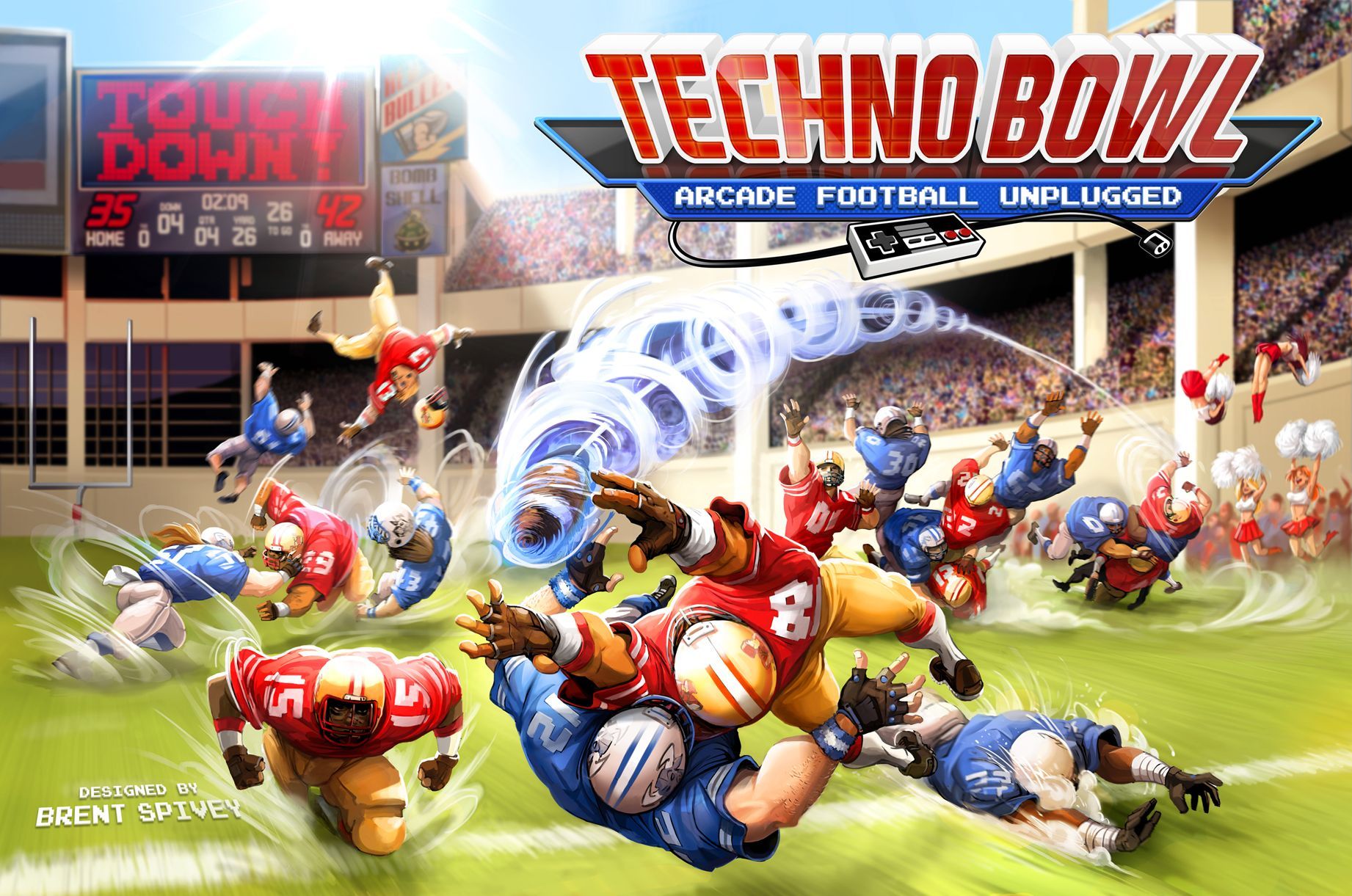 TECH? NO! Forget about expensive game systems, emulators, disconnected online games, and high-priced yearly roster updates. TECHNO BOWL takes everything you love about arcade and video game football classics like Tecmo Bowl, NFL Blitz, and Madden and puts it all on the tabletop. 1UP And as if that isn’t cool enough, it also gives you a feature that gamers have long asked for but never gotten… until now! What is it you ask? As a coach in TECHNO BOWL, you will design your own formations and plays. That’s right. Let me say it again. You get to design your own formations and plays. And I’m not talking about choosing several formation cards, lining up elements on a chart, or utilizing some other abstraction. This is putting the power to effortlessly create real football formations and plays into your hands. ZERO DOWN TIME Thanks to the BOX SPORTS ENGINE, there is almost zero down time in the game [except for half time and timeouts of course!]. Coaches are constantly involved, and the on-field players are always interacting with one another as skill checks and ever evolving plays result in: free actions, reactions, read-and-reacts, and offensive and defensive adjustments. Add to that real world timers for setting up formations and selecting plays, and you have a truly dynamic fast-paced tabletop football experience. UNPARALLELED FOOTBALL GAMEPLAY TECHNO BOWL delivers that authentic football feel like no game before it. Establish the running game by punching it in between the tackles or tossing it to a back for an outside sweep. Launch an air offensive while sitting in the pocket or throwing on the run with laser accurate throws directly to the receiver or exciting route passes where you lead the receiver in hopes of beating the coverage. Defense can run man, zone, and mixed defensive packages and bring the blitz. Oh, can it bring the blitz! No matter which strategy you choose, the gameplay will look, feel, and flow like a real football play. OPTIONS TECHNO BOWL is all about options, and there’s a game mode, team, and play style for everyone. You even have the option to run an option! MODES There are five different modes of play. Each of these brings a different experience to the table. - TECHNO is 7-vs-7 with no skills and no field goals. - ALL TECHNO is 7-vs-7 with skills but no field goals. - INFERNO! It’s ALL TECHNO with more awesome and fire! [more later] - PRO is 8-vs-8 with no skills but includes field goal rules. - ALL PRO is 8-vs-8 with skills and field goal rules. Each of these modes offers a completely different game experience, and I know what you’re thinking. How does adding an extra couple of players to the field [and the ability to kick field goals] equate with an entirely different mode? Trust me. Having that extra player on both sides of the ball quite literally changes everything. MAD SKILLS When playing in modes that utilize special skills and abilities, coaches will have access to three types of players: - IMPACT - STAR - SUPERSTAR These players will come equipped with one or more of the 26 skills found in the game. That count of 26 skills doesn’t even include core fundamentals or INFERNO MODE specific skills. SKILL Speaking of skills, TECHNO BOWL is a game of skill and not a random ‘dice fest’. The 2d6 rolls used for skill checks mean that coaches won’t fall prey to straight-line probabilities or random chaos. Winning is about getting the right match and modifiers to deliver a high percentage roll, having a plan when you get an unusually poor result, and knowing the right time to make a high risk roll for a shot at a very high payoff. Of course, your formations, play calling, and player positioning create these opportunities. PLAYMAKER DIE The PLAYMAKER die powers some of the special skills in the game like stiff arms and spin moves allowing for sophisticated passive abilities to be triggered without the need for complex rules. TEAMS There are 32 teams in the MORE FUN LEAGUE [MFL], and each of these has its own unique play style. This means that you’re not just trying to get into the head of the coach that’s sitting across the table from you, but that you have to take into consideration the strengths and weaknesses of the players on the specific rosters that you and your opponent are using. PLAYER SKILL RATINGS The player skill rating system ensures that coaches and spectators will know how well or poorly a player performs fundamental actions by simply looking at the jersey number! No need to look at charts or extended stat lines. The league skill cap manages team composition so that you are never taxed to remember an insane number of special abilities or which players have them. Coaches get beaten by other coaches and NOT the rules. Welcome to the More Fun League!