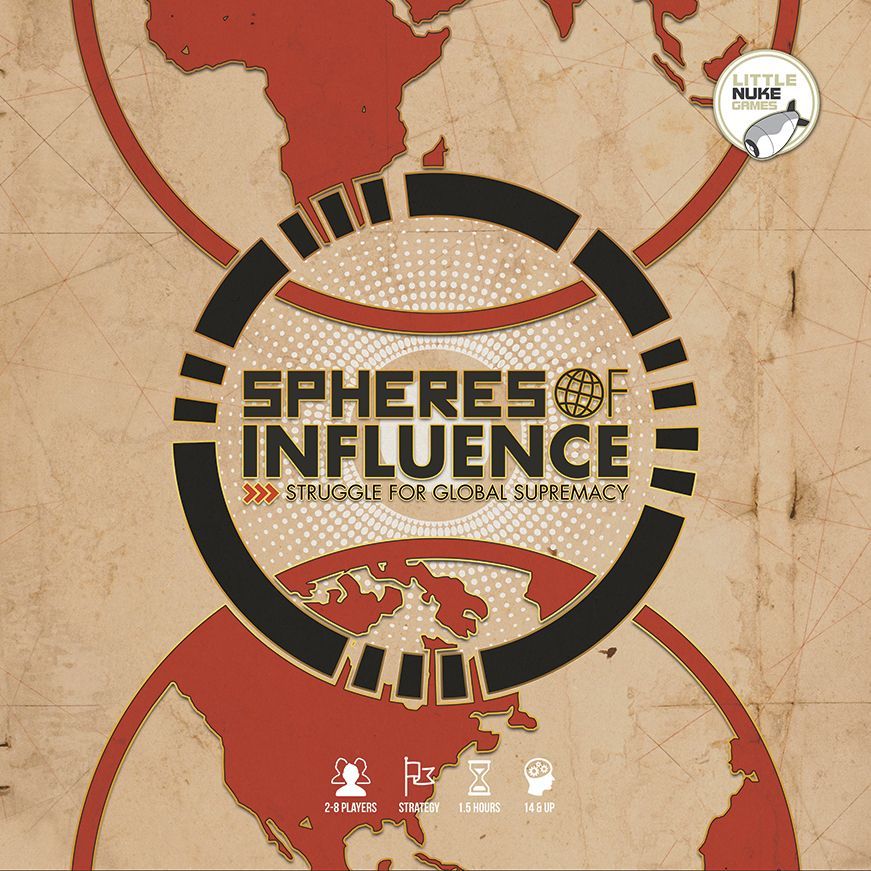 Spheres of Influence: Struggle for Global Supremacy is a 2-8 player free-for-all light wargame, set on a modern world map. Players will take control of one of the games 8 mighty factions as they compete over the world's spheres of influence, capitals and oil reserves. Will a mighty caliphate rise to power? Will the communist curtain once again fall? Or will western democracy sweep the world? In games with fewer than 5 players, each player will control 1-4 factions simultaneously, coordinating their efforts against the other players' coalitions. Each faction will begin the game with only a single, semi-randomly determined territory under its control. From this one space, factions will aggressively expand. The gameplay of Spheres of Influence is divided into a set number of rounds, with each round being split into 2 phases: the mobilization phase and the turn phase. During the mobilization phase, factions take turns placing units based on how powerful they are. During this phase, the global turn deck is also formed. This deck will be used to determine the turn order and frequency of action for each faction during the upcoming turn phase. To form it, each faction contributes a number of their turn cards (based on the number of oil fields they control) to a single, shared deck of turn cards. This deck is then shuffled and place down on the table. During the turn phase, one at a time the top card of the turn deck is revealed. Whichever faction's card was just flipped, that faction takes a turn, performing a single action with its units on a single space (moving, attacking, annexing or passing). Once that action is complete, that turn ends and the next turn card is revealed, with the process repeating itself. This makes turns both fast (with many turns lasting only a couple of seconds) and suspenseful, since none of the factions know precisely when their turns will be. It also ensures more incremental game developments - factions cannot sweep across all of Asia in a single turn and players can respond to attacks or betrayals much sooner. Once the last turn card in the global turn deck has been revealed, a round ends and another round begins. Combat is resolved by a simple dice mechanic fused with a "situational" modifier that loosely simulates the increased difficulty of attacking a defended coastline, breaking a naval blockade, or striking a fortified position. Along the way, powerful special cards can be played, allowing players to strike with submarines, deploy heavy armor, paradrop troops around enemy defenses, and launch devastating nuclear attacks. Games have either 5 or 6 rounds depending on the number of factions. Once the final round is complete, the faction who controls the most spheres of influence wins the game for its owner. Games typically last about an hour and a half, and experienced players can sometimes finish in just a single hour.