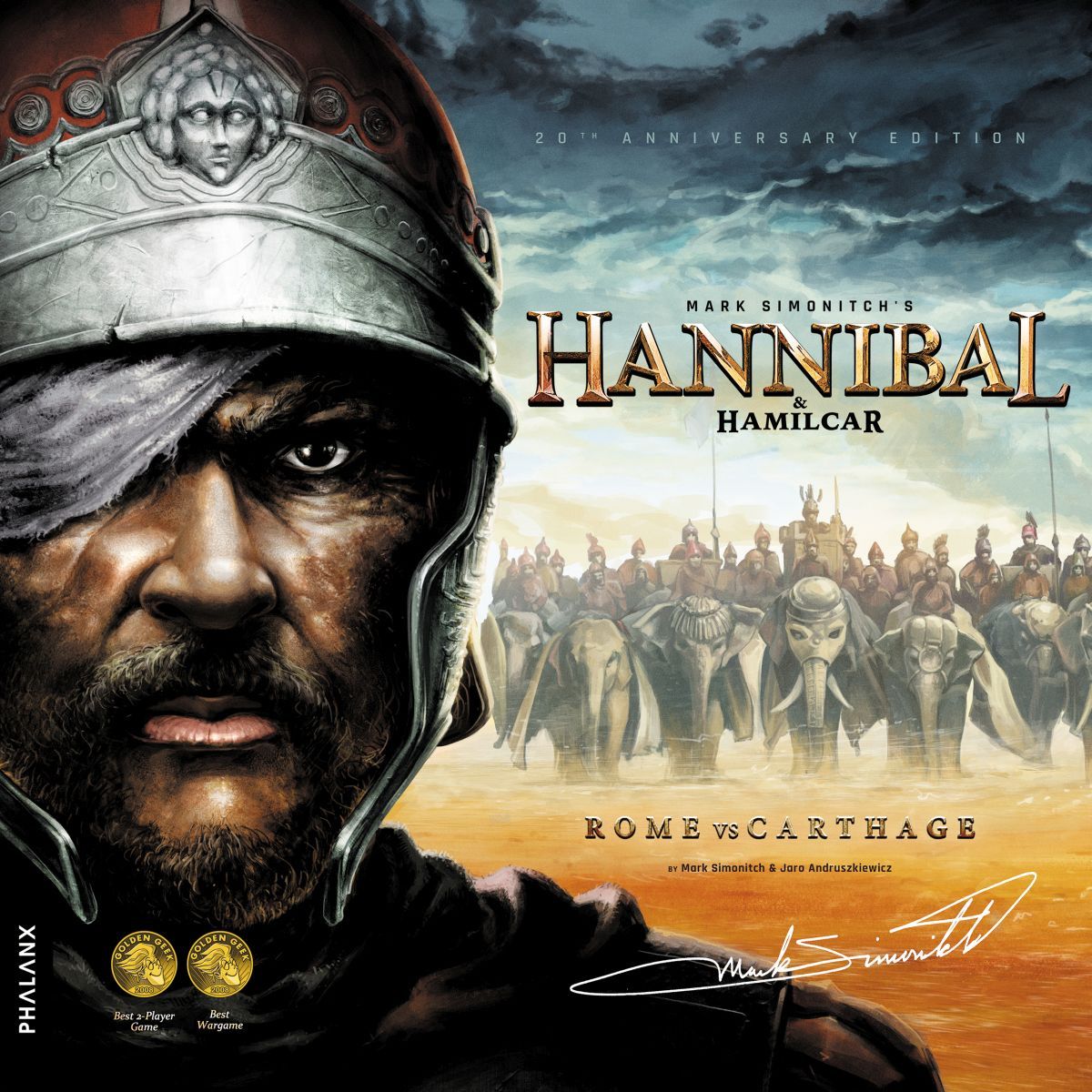 Hannibal & Hamilcar: Rome vs Carthage is a 20th anniversary edition of the classic Hannibal: Rome vs. Carthage, an asymmetrical card-driven game for 2 players set in the time of the epic struggle between ancient Rome and Carthage. It presents a conflict between two superpowers of Antiquity from the classical Clausewitzian perspective, according to which a power only reverts to military operations when there is no other way to achieve political dominance. Hannibal was designed by the world-renowned Mark Simonitch. This 20th Anniversary Edition of the game includes new scenarios and variants. Certain game mechanics have been streamlined, while producing exactly the same game results as the golden classic. Hannibal has won numerous awards (including the Golden Geek Best 2-Player Board Game Award and the Golden Geek Best Wargame Award), and is currently ranked 11th in BoardGameGeek.com’s Wargame rankings. The original rules and components were updated by Mark Simonitch and Jaro Andruszkiewicz. The development team at PHALANX has given the original game a careful, meticulous update. It is now easier and faster to play. It has received new artwork. The original game has been further enriched by the addition of two new expansions: Sun of Macedon and Price of Failure. These expansions are not Kickstarter exclusives, so they will be available as a separate products. This 20th Anniversary Edition of the game includes new scenarios and variants as well as new graphics, miniatures, new custom dice, extra cards, and a new double-sided mounted board (with the Hannibal map on one side and the Hamilcar map on the other). Hamilcar, set during the First Punic War, is a companion game sharing components and using similar mechanics. It introduces a naval system and naval battles. Both players compete for control of the Mediterranean Sea in a conflict that will be described as a war between an elephant and a whale - the struggle of a land-based empire versus the world’s naval power. Rome's goal was to break through the island chain of Sicily, Corsica, and Sardinia - Carthage's defensive line to contain Rome on the Italian peninsula. In both games players use Strategy Cards for multiple purposes: moving generals, levying new troops, reinforcing existing armies, gaining political control of the provinces involved in the war, and introducing historical events. When two armies meet on the battlefield, a second set of cards, called Battle Cards, are used to determine the winner. Ultimately both players seek victory by dominating both fronts: military and political.