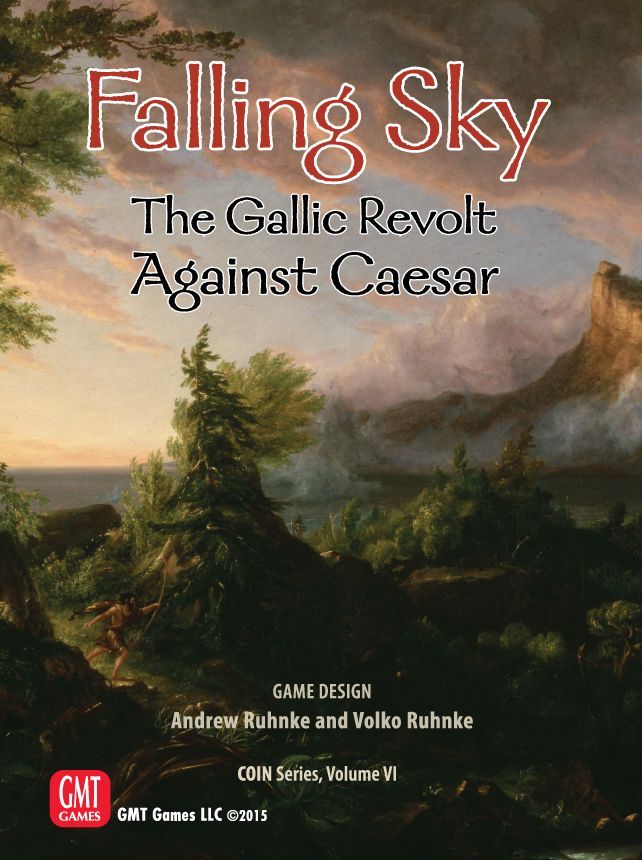 Late Summer, 54 BC: In a series of brilliant and brutal campaigns, Caesar has seized Gaul for Rome. But not all tribes rest subdued. In the north, the Belgic leader Ambiorix springs a trap on unwary legions while Caesar is away. In the south, an ambitious son of the Arverni seeks to unite a Celtic confederation in revolt against the hated Romans. And what of the influential Aedui? Their republic appears content to shelter under Roman protection – but can they be trusted any further than any other Gauls? Meanwhile, along the Rhine, Germanic warbands multiply... Falling Sky : The Gallic Revolt Against Caesar (formerly Gallic War) takes 1 to 4 players into the military actions and complex politics of Roman-occupied but not-yet-conquered Gaul. Caesar and his hard-hitting legions cannot be everywhere and will not triumph without powerful allies among local tribes. But each Gallic confederation has its own agenda and must keep its eyes not only on the Romans but also on Celtic, Belgic, and Germanic rivals. Players recruit forces, rally allies, husband resources for war, and balance dispersed action with the effectiveness and risk of concentrated battle. Leveraging GMT's popular COIN Series system to integrate historical events with wide-ranging strategic options across the game board, Falling Sky provides accessible and deep historical gaming of war, politics, and diplomacy. A full solitaire system enables solo players to test their skill against an array of game-run factions, each unique. From Britannia to the Rhenus and down to Provincia, armies are on the move. Who shall finally subdue Gaul? Players: 1-4 (full solitaire system) Map: Area movement Time scale: 1 year per 15-card campaign Designers: Volko Ruhnke and Andrew Ruhnke Series Developer: Mike Bertucelli (source: GMT website, updated here by designer)