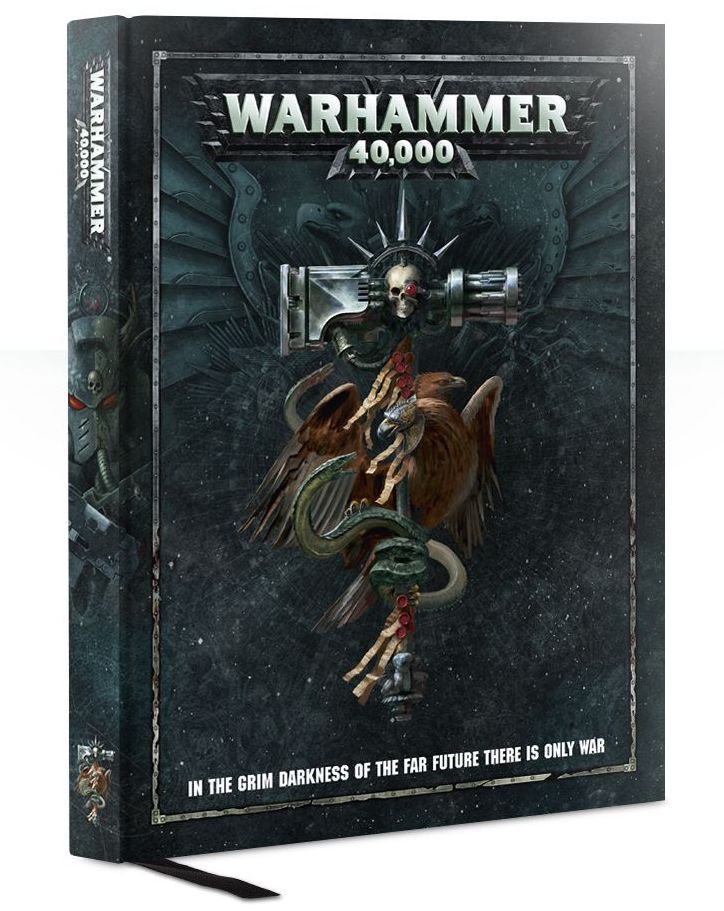 There is no time for peace. No forgiveness. No respite. There is only war. After more than forty thousand years of war and strife among the stars, Humanity stands on the brink of extinction. Beset on all sides by hostile aliens and threatened from within by traitors, Humanity’s only chance for survival rests with the continuation of the cruel and bloody regime known as the Imperium. Yet few among Mankind’s untold population realise the full truth of their situation. If there is any future at all, it is a grim one… The Book A 280-page hardback, this is the essential book for any fan of Warhammer 40,000 – everything you need to know to collect, build, paint and play with Citadel miniatures. Rules The Core Rules explain everything you need to play to play Warhammer 40,000. Moving, shooting, using psychic powers, charging, fighting and morale tests are covered, giving you the basic framework to play with. You can play a game using only these 8 pages, bolting on more advanced and complex rules when you and your opponent are ready. Three Ways to Play Open Play – pick some models, put them on the table and begin a game. This is the most flexible approach, designed with near-limitless possibilities; all you need is some models, their datasheets and the core rules. Included are some themes and ideas you can use or build upon to add atmosphere to your games, and 3 example missions. Narrative Play – Warhammer 40,000 has a vast, rich history with countless epic battles. Narrative Play is designed to let you and your friends re-enact those battles at your leisure. There are special rules to help you do this, such as Concealed Deployment and unpredictable, random battle lengths, and the book includes several missions * 6 Crucible of War missions and 1 Echoes of War mission, each showing you how to play in this style. Matched Play – for many players, Warhammer 40,000 is an opportunity to prove their mettle with tactics and strategy, an exercise in out-thinking and out-gunning their opponent with balanced, equal armies: Matched Play is for them. There are several ways to ensure that your forces are balanced against each other – a points limit is the typical way, but the system is flexible enough to allow armies based on unit numbers, Power Ratings, Wounds; as long as your limits are agreed, the possibilities are manifold. This book provides details on choosing your armies, and provides missions as examples of the tactical challenges available: 6 Eternal War and 6 Maelstrom of War missions, with explanations covering the use of Tactical Objectives. Advanced Rules While the Core Rules provide with you with everything needed to play, the Advanced Rules are a selection of rules and expansions that can be used to play with your miniatures the way that you want to. With these rules, there are always new challenges to face, new battles to fight, and new ways to play: Battle-Forged Armies: organise your models in a way that reflects the armies of Warhammer 40,000 – this places restrictions on your army, but makes up for it with powerful benefits, which use a system of Command Points; Battlefield Terrain: rules for a variety of terrains (Woods, Ruins, Barricades, Obstacles, Imperial Statuary, Fuel Pipes, Battlescape and Hills), each of which introduce scenarios and opportunities that change the nature of battle; Battlezones: rules for fighting amidst the effects of otherworldly environments, including low visibility, beneath an apocalyptic orbital battle and in the middle of a devastating psychic maelstrom; Planetstrike: slam down from orbit in a terrifying planetary assault. Two players are separated into Attacker and Defender, with scenarios that play out a full incursion and a Planetfall mission; Cities of Death: street fighting in the ruins of a shattered city, with buildings bitterly fought over – the claustrophobia of urban warfare makes for tense battles with snipers and grenades coming to the fore. Includes a Firesweep mission for playing out room-to-room combat; Stronghold Assault: dig in for a game of fortified siege warfare. One player seeks to overwhelm the prepared defences of another, with a Bunker Assault mission included; Death From the Skies: dogfighting for your Flyer models, allowing the recreation of epic clashes above the battlefield. A Tactical Strike mission involves a defence against a bombing run; Multiplayer Battles: rules accommodating three (or more!) players, with an example of a multiplayer battle to work from; Campaigns: an overview of linking your games into Tree, Matrix and Map campaigns.