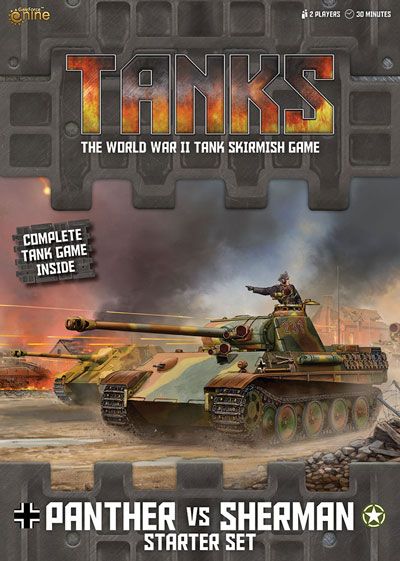 Tanks: Panther vs Sherman is an easy-to-learn, quick play, small-scale game in which you take command of a tank platoon, seeking to destroy your opponent's tanks and secure victory. Tanks is a flexible game with lots of ways to create a finely-tuned army that fits your play style. In a half-hour, you can pick your tanks and crew, upgrade them to your specifications, defeat your enemy (or die trying), and be ready for the rematch! During the game, players go through a number of turns until one player achieves victory. Each turn consists of three Phases: Movement Phase: Players move each of their tanks in Initiative order starting with the lowest Initiative tanks moving on to the highest Initiative. Shooting Phase: Players shoot with each of their tanks in Initiative order starting with the highest Initiative moving on to the lowest Initiative. Command Phase: Players mark destroyed tanks, repair special damage, check for victory conditions, shuffle the Critical card deck, and clear all the Speed tokens.