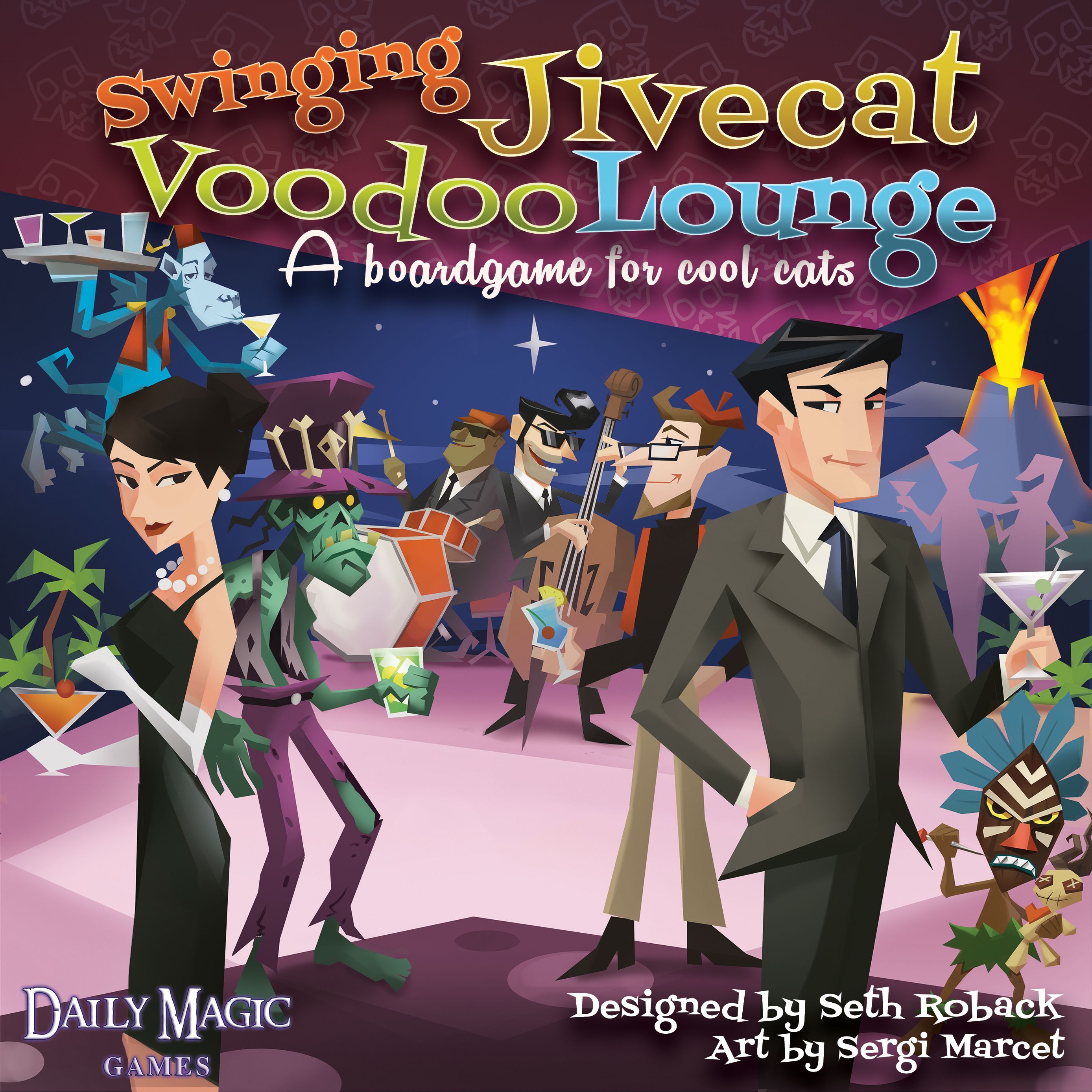 You and your fellow voodoo spirits have traveled back in time to poke a little fun at the hepcats of the 1950s cocktail culture. Your mystical influences will link these lounge-goers into social cliques that give you access to the coolest party-people that all the hipsters want to be near. Mix a few drinks, rack up the magical monkey points, and crown yourself king of the Swinging Jivecat Voodoo Lounge. Score monkeys to hang on your martini glass by adding Jivecat contacts to your clique and claiming Trend cards through skillful manipulation of your lounge contacts. Be the player with the most monkeys at the end of the round in which a player scores their fifteenth monkey and be crowned the winner! Players are dealt a hand of four cards and on their turn use those cards for their face value to claim low-brow contacts in the lounges or use the card's special powers to claim Jivecat contacts and cast spells (Zombie, Rada, Cheval, and Voodoo). For example, a 4 Zombie can be used to claim a "4" contact in the Lava Lounge. Card values can be added and subtracted from each other, allowing players to pinpoint just the right contacts to advance their plans. However, the player could use the card for its Zombie spell, instead. By paying a skull, they can place the card in their tableau as an extension of their hand allowing them to use that card's value for many turns in the future. In these ways, players create "cliques" of linked contacts in and among the four cocktail lounges (Lava, Cocoa, Tiki, and Neptune) trying to schmooze their way to the Jivacat contacts that score points. The contacts are limited though, so several players may be angling for a specific Jivecat. During play, a series of Skull Cards allow players to gain skull token reward that power their voodoo spells, and a Trend Card track presents players with monkey rewards for achieving specific contact configurations. The Trend cards also provide special bonus abilities to the players if they can maintain the required configurations. Each player has a martini glass to hold the contact chips and scores are kept through hanging cocktail monkeys on the rim of the player's glass. Orange monkeys are 1 point and blue monkeys are 5 points. Game end is triggered when one player reaches fifteen monkey points. The round is completed, bonus monkeys are rewarded for trends that have been maintained, and the player with the most monkeys wins. To add to the cocktail themed fun, each card also has a different cocktail recipe for adult players to mix and enjoy.