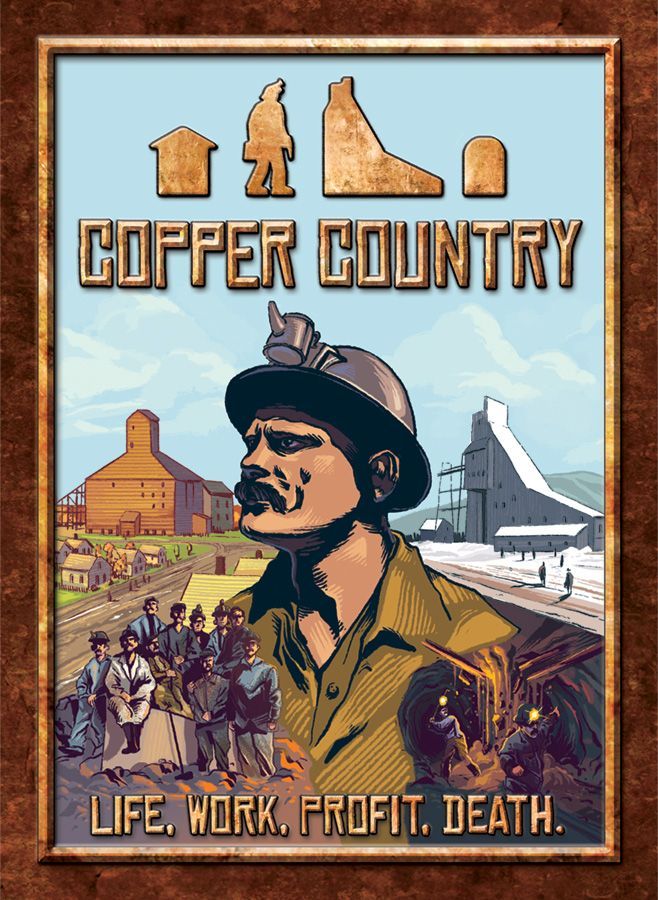 The year is 1840 and America’s first mining boom is about to strike in the remote wilderness of Michigan's Upper Peninsula. Take on the role of a mining company and compete for copper by casting miners and machines into what was known as the underground lottery. As the industry grows, so do the communities surrounding your mines. But every attempt to wrest copper from the ground hangs the fortunes of your company, and the lives of your miners, in the balance. In Copper Country, each player takes on the role of a unique mining company and competes to produce the most copper before it's all gone! To produce copper, players hire miners to work mine sites. Your miner's productivity is measured in shifts. Each shift, you reveal one card from the top of the production deck, then choose an outcome by playing capital card resources from your hand, placing your miner at risk, or both! Stake your claim by building company houses to increase your miners' loyalty and safety. Expand your mining empire by building shaft houses and hoist houses to increase your copper production. When a player produces copper, the byproduct — poor rock — is removed from the industry track and dumped onto the mine site, reducing shifts nearby for all players. As players remove more poor rock from the industry track, local businesses open their doors, historical events occur, and Copper Country enters new eras of production. The game ends when the last poor rock is dumped onto a mine site, depleting Copper Country's mineral wealth. The winner is the player who has produced the most copper!